Here’s a reflection from health communication specialist Craig Manning (Viral Special Pathogens Branch) who worked with the Navajo Nation on a radio program about Hantavirus and Zika.

I had never met Navajo Bob, but had heard of him. My colleagues on Navajo Nation told me that he spoke Navajo faster than anyone they knew. As a radio host at KTNN, Bob was something of a national treasure. Most speakers of Navajo deliver in a measured, deliberate cadence. Not Navajo Bob. He flew. I had heard him on the radio during previous visits, and was eager to meet him.

I’d come to Navajo Nation in March 2016 to work on health education around Hantavirus and Hantavirus Disease. Early in 2016, Navajo Nation had experienced four Hantavirus cases, including a fatality, and Navajo Nation Vice President Jonathan Nez made it clear during his visit to CDC in February 2016 for the Tribal Advisory Committee meetings that CDC’s support was needed. Weather data showed higher-than-average precipitation for the area, implying a potential increase in the deer mouse (Peromyscus maniculatus) population, with a corresponding increased risk of human exposures.

Navajo Nation is about the size of West Virginia, with about 150,000 persons living inside the Nation, and another 150,000 tribal members living not far from it. Their experience with Hantavirus began in 1993 with the appearance of a “mystery disease” with high mortality. People reported sensations similar to drowning or having extreme difficulty breathing. Media organizations – local, national, and international – descended upon the small, rural communities of the Nation, to report on what, for a time, was called the “Navajo Disease.” Ill feelings still persist among the tribe over the needless stigmatization.

Following the identification of the virus as a member of the globally-distributed Hantavirus family and the characterization of a new clinical syndrome, CDC developed, and maintains, its relations and outreach efforts with Navajo Nation, sharing information with the Navajo Epidemiology Center, as well as with epidemiologists from the states in which the Nation lies—Arizona, New Mexico, and Utah. CDC’s Viral Special Pathogens Branch curates the Hantavirus website as well as a database of Hantavirus cases going back to 1992.

During my March 2016 visit, Vice President Nez and our colleagues at the Navajo Epidemiology Center were supportive of using local community radio to reach people on or near the Nation, and encouraged us, in the interest of time, to consider radio as a way to reach out to Navajo communities. I approached KTTN, with 50,000 watts of AM/FM power reaching across the Nation, to talk about airing Public Service Announcements (PSAs) and the possibility of a live, call-in style program on Hantavirus and Zika virus. Yes, they could do both. Navajo Bob would be our host for the live program, moderating, asking pertinent questions, maintaining pace and focus, and making sure our messages reached our targeted audiences. We’d bring the experts, both Navajo Nation President Russel Begaye and Vice President Nez would join us, and Bob would play us like a violin. It would be seamless. And even better, I would finally get to meet Navajo Bob.

However, there wasn’t much time to pull everything together. Back in Atlanta, VSPB’s Program Management Official Celine Taboy and Lee Kennedy at the Procurement and Grants Office moved swiftly to put a contract in place with KTNN, helping ensure this important public health initiative could take place.

I went to KTNN an hour ahead of the start time of 6 p.m. to meet Navajo Bob. He greeted me warmly, and we got down to planning the two-hour program. He looked at my outline, with introductions, topics, key messages, summaries, bios of the experts who’d be participating, and closing summaries.

I asked him what skills he had that made him a good host. He said, “I was trained as an interrogator. I worked with police and other law enforcement.”

“Do you interrogate your guests? I don’t think that’s going to work,” I replied.

“Don’t worry. I do ask questions, but just to clarify a point. Mostly the experts will do the talking, and I just keep it moving,” he said. That was reassuring.

At 6:00 pm, the sports reports ended, the music came up and then faded, the team was ready, and Navajo Bob was in his element. He moved through the introductions, hopping easily between Navajo and English.

The Navajo speakers among the eight of us had no trouble understanding him. It was all working.

As Navajo Bob promised, the show took off and picked up speed. Del Yazzie, director of the Navajo Epidemiology Center and a graduate of Johns Hopkins, stepped to the microphone, thanked Navajo Bob, and described the purpose of the forum in Navajo. I imagined listeners at the far western edge of the Nation and elsewhere listening attentively, in their cars, in their homes, while tending their livestock.

The radio studio was buzzing. We were figuring out our roles. As one person was sharing information, the rest of us were organizing the details, flipping through pages of notes. Ramona Antone-Nez, acting director of the Navajo Department of Health, ferried text message questions to us, and then relayed our responses to the health educators for translation and sharing to the listeners. Jeannette Yazzie, chief nurse for Navajo Area Indian Health Service, commented on many points. Herman Shorty, director of the Navajo Office of Environmental Health, who was around for the initial Hantavirus outbreak in 1993, provided his insights on the ecological conditions triggering growth in the deer mouse population. I spoke about how Hantavirus is maintained within the deer mouse population.

Around the midpoint of the two-hour broadcast, Navajo Nation President Russell Begaye and Vice President Nez entered the studio. Navajo Bob greeted them as old friends. We all paused in our presentations, and the two leaders spoke, mostly in Navajo. The parts in English were about simple prevention measures, the wider coordination efforts in place, and an unhesitating appreciation for CDC’s quick response to their needs. More than once CDC was thanked for putting a person “on the ground” to support the public health efforts under way on the Nation.

The final half hour of KTNN Forum allowed listeners to send text messages asking questions. The questions were practical: If there are deer mice under my firewood, can I safely carry the firewood to my house? Can cats and dogs get Hantavirus and give it to us? Does Zika virus affect livestock? We scrambled to triage the questions and organize the responses, until finally, at 8:00 p.m., Navajo Bob wrapped up the show, turned up the music, and we all breathed a collective sigh of relief.

Amid high fives and photo ops, I asked everyone if they would do it all again, and the answer was a clear Yes.

Subsequent conversations with colleagues and friends on Navajo Nation suggest that the Radio Forum program was well received and appreciated. One colleague mentioned to me that she heard it as she drove through Wyoming, such being the power of the AM signal in the evening.

The KTNN Forum occurred in the wider context of two other 6-minute PSAs running on KTNN for six weeks, using the voices of Vice President Nez and former President Peterson Zah, now serving as an advisor to the Office of the President and Vice President, to speak in Navajo on both Hantavirus and Zika.

Together, the PSAs and the Forum on KTNN demonstrate strong support from tribal leadership. It also helps highlight the skills and commitment of the Navajo Department of Health‘s Epidemiology Center. Together with some help from CDC, these efforts are making a difference in the lives of people on Navajo Nation.

The good work continues, and we’ll no doubt get to work with Navajo Bob again.

This Inside Story by Craig Manning 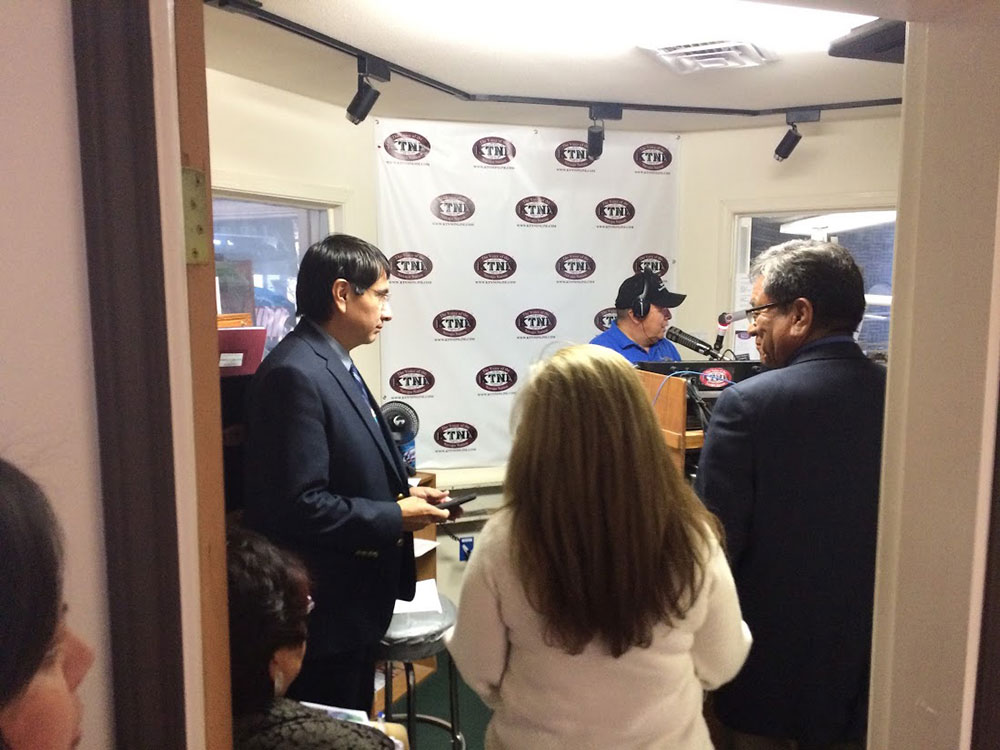 Navajo Nation Vice President Jonathan Nez (left) and President Russell Begaye (right) participate in CDC-sponsored Radio Forum on Hantavirus and Zika virus on KTNN AM radio, which broadcasts daily in Navajo across much of the Navajo Nation. Radio announcer “Navajo Bob” (in background with baseball cap) served as moderator and guided the discussion. 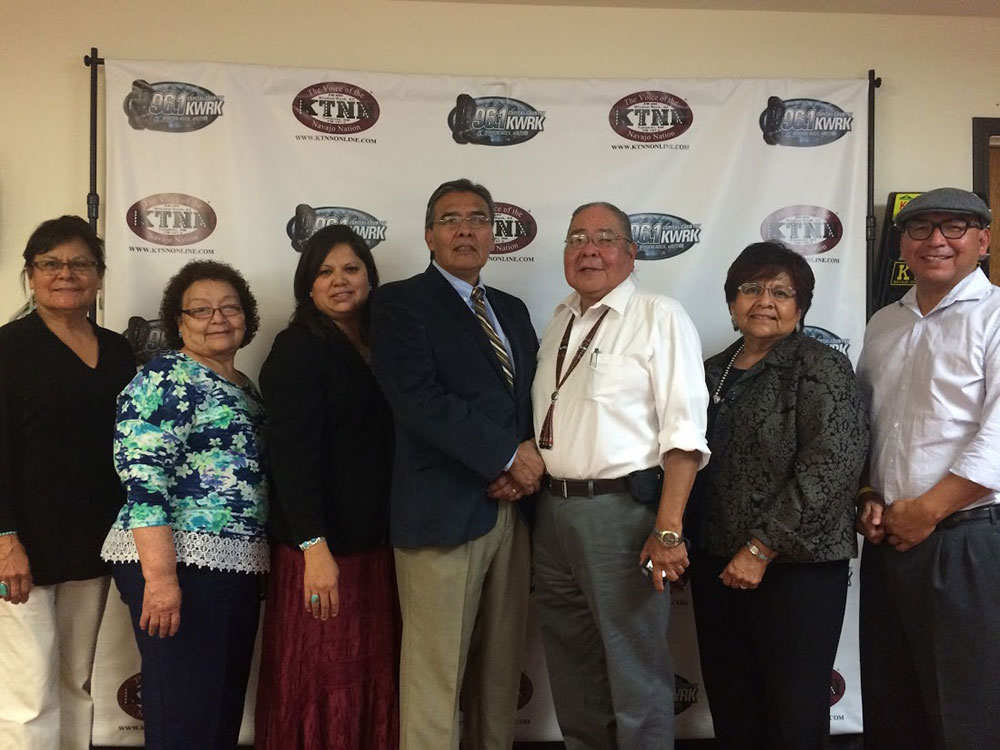 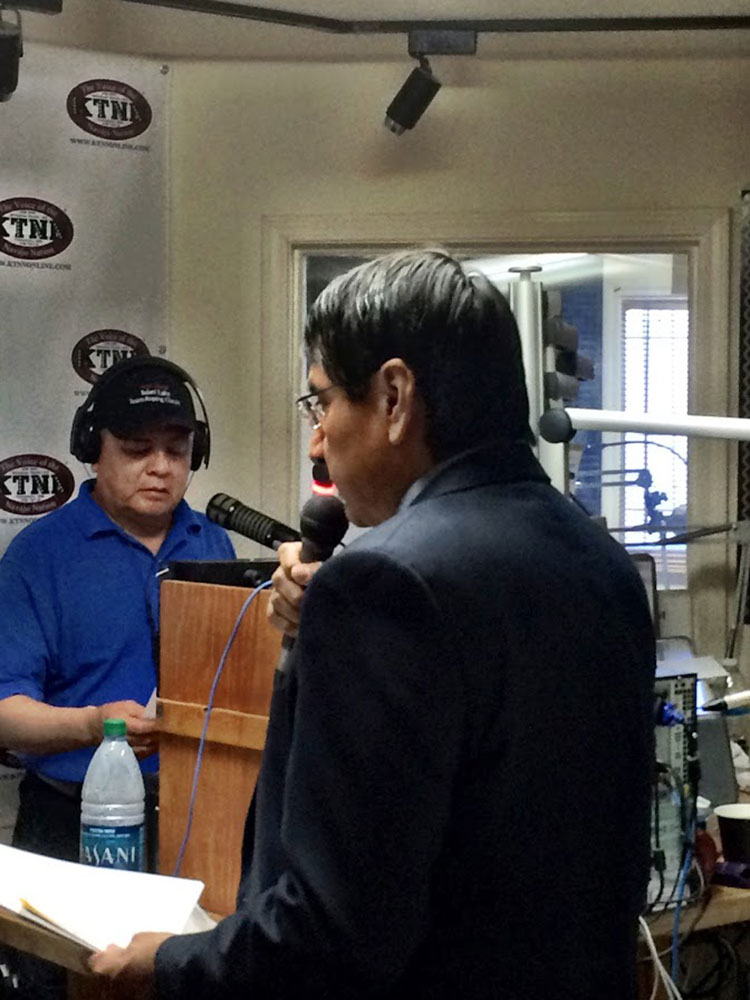 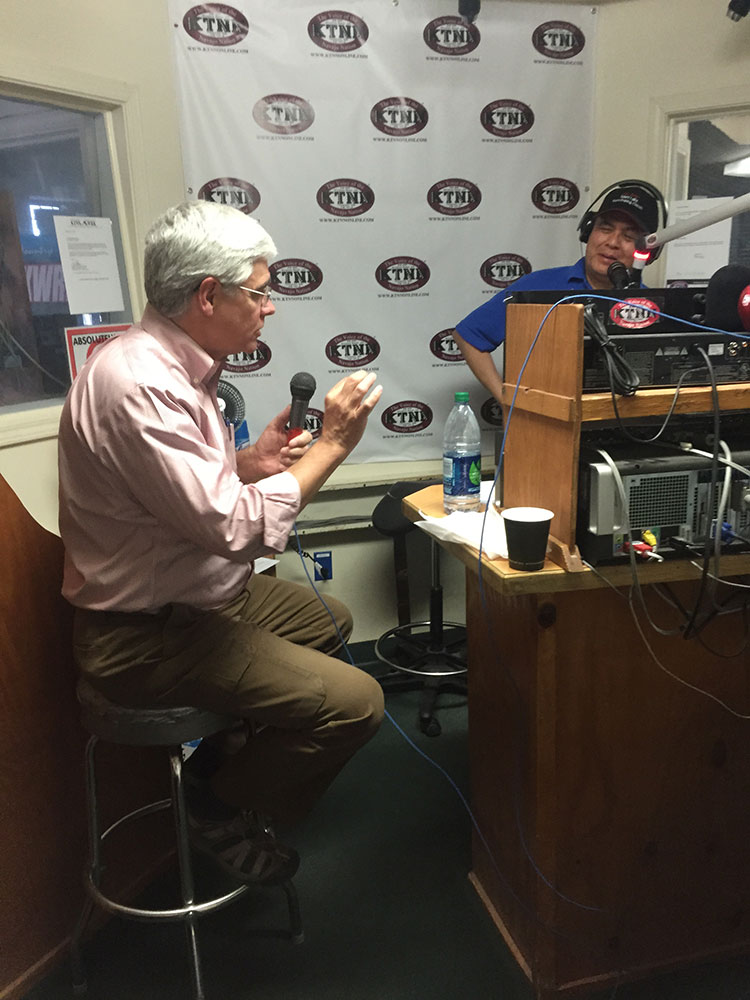