The issue of racial misclassification is well-documented in Indian Country and has been highlighted throughout the COVID-19 pandemic as a significant data concern. Despite it being a known issue, until recently there had been little capacity or resources to prevent or correct for it in the Great Plains Area (GPA).

Unknown to many, funeral directors are responsible for classifying race on death certificates. Recognizing this as an opportunity to prevent racial misclassification before it happens, the Great Plain Tribal Epidemiology Center (GPTEC) made funeral director outreach a priority.

GPTEC first reached out to the South Dakota Funeral Directors Association in 2019 and arranged to attend their district meetings. Unfortunately, COVID-19 resulted in the meetings being canceled.

In 2021 and 2022 meetings resumed, and several members of the GPTEC team were able to attend five district meetings in South Dakota to spread awareness about the issue of racial misclassification on death certificates and learn more about the challenges funeral directors face in collecting and reporting data on race/ethnicity. One of the meeting highlights was a funeral director who expressed they “did not even know anyone looked at that information.” GPTEC was able to denote the important role race data plays in epidemiology and public health. Additionally, a critical barrier in the vital records electronic system was identified, which GPTEC was able to communicate back to the Vital Records office in South Dakota.

Additionally, GPTEC’s epidemiologist II, Sarah Shewbrooks, presented via webinar for the Iowa Funeral Directors Association to educate on data quality and highlight the vital role of funeral directors in preventing racial misclassification. Shortly after, an individual from the Massachusetts Department of Health contacted GPTEC indicating they had heard about the materials Sarah presented and asked to use and distribute them in their jurisdiction, demonstrating how wide of a reach her presentation had! Iowa also indicated they would like GPTEC to attend their state meeting and potentially host a round table session on the topic in 2023. 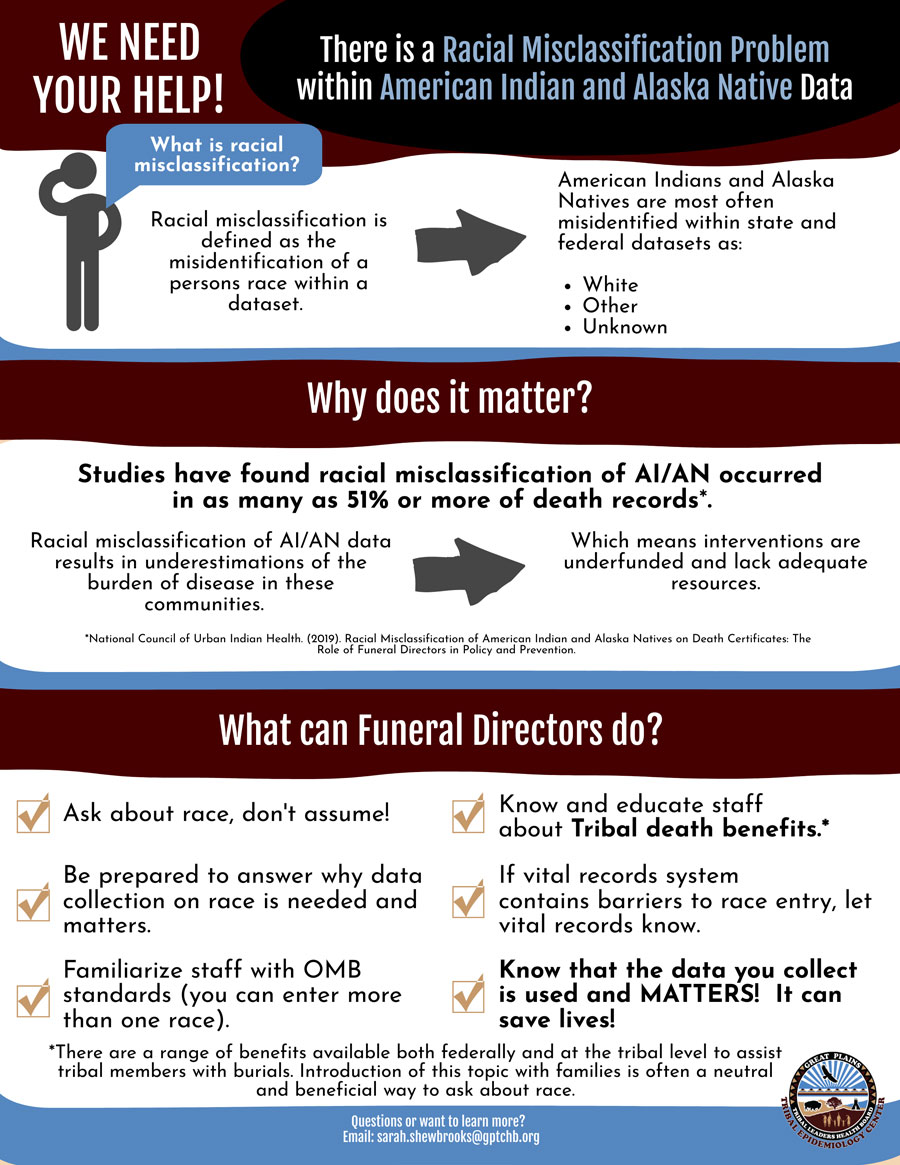 To further spread awareness of the importance of racial classification to funeral directors who do not interact with their state Funeral Directors Association, GPTEC also mailed out flyers and magnets on the topic. The total number mailed was close to 1,300.